Refusing an Inheritance in Germany

The loss of a close relative often involves not only emotional burdens, but also legal, financial and organisational difficulties with regard to the inheritance. The heir automatically assumes the position of the testator – by will or in the context of legal succession – and in full. This means that, in addition to the assets, the debts accumulated by the testator during his or her lifetime must also be bequeathed and repaid by the heir in future. If the estate is over-indebted, many heirs may have no choice but to refuse to accept the inheritance and effectively disclaim it within six weeks.

Your Legal Partner for Inheritance Law in Germany 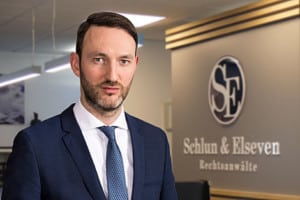 At Schlun & Elseven Attorneys, our inheritance lawyers will be by your side

Reasons for Refusing an Inheritance

In principle, no one is obliged to inherit against his or her will. This is important to know because heirs often inherit without their intervention or unknowingly. The testator’s inheritance is transferred in full to the heir by law through a will, inheritance contract or legal succession, initially under § 1922 German Civil Code (BGB). The heir receives not only the assets but also the debts and other liabilities of the deceased. In principle, they must also pay these out of their private assets. The heir is therefore initially liable not only with the inherited property.

Refusing an inheritance therefore makes sense if the estate is completely over-indebted. Other reasons for the inheritance to be waived may be an entrenched dispute within the community of heirs or the threat of seizure of the inheritance by the heirs’ own creditors. In order to determine whether the estate is over-indebted, you as heir should quickly obtain a detailed overview of the inheritance. All the components of the estate should be compared. These include valuables, real estate, bank balances, securities, but also loans, maintenance arrears, claims to a compulsory portion (Pflichtteil), funeral expenses and any additional costs for the opening of a will or administration of the estate.

After the successful refusing of the inheritance, it is transferred, together with the debts, to the next person in the succession. Therefore, you should make sure that you also waive the inheritance for your underage children.

The inheritance plan must be implemented in due form and time. According to § 1944 BGB, the rejection of an inheritance can only take place within six weeks. This period begins at the time when the heir becomes aware of the inheritance. If the succession has been established by the testator’s last will and testament and if they have deposited this last will and testament with the court, the heirs receive a letter from the probate court. This letter provides the necessary information about the succession and sets the deadline in motion. In the case of legal succession, the time limit begins to run as soon as the deceased’s death is known. A longer period of six months instead of six weeks applies if the deceased had his last residence abroad or if the heir who rejected the inheritance was abroad when the period commenced. For the succeeding heir, the rejection period then begins anew

The form in which the inheritance is bequeathed is standardised in accordance with § 1945 BGB. According to this, rejecting the inheritance is put into effect by declaration to the competent probate court. The court with jurisdiction is the court where the testator was resident. The declaration must be made personally by the heir for the record of the probate court or in a publicly certified form by a notary public. In any case, a simple letter is not sufficient.

Avoiding Conflicts when Refusing an Inheritance

Rejection after Acceptance of the Inheritance

Conversely, if some not inconsiderable assets in the estate are subsequently uncovered, there is also the possibility of a challenge. The heir can reverse the disallowance in accordance with § 1954 BGB by contesting it within six weeks of becoming aware of the reason for the disallowance. The contestation of the disallowance is then deemed to be acceptance of the inheritance in accordance with § 1957 BGB. A ground for avoidance does not already exist if the heir has merely incorrectly valued the estate’s assets. He must have completely new facts concerning the estate. The contestation of the bequest of the estate is therefore also based on the special circumstances of the respective individual case.

Reversing the Rejection of an Inheritance

It is not only the bequest of an inheritance that offers protection against the personal liability of the heir to the creditors of the deceased. There are other possibilities to limit the financial disadvantages of an inheritance. If the estate is also unclear and therefore unclear as to what assets and debts are available, alternatives to the rejection of the inheritance may be more advantageous. This also applies if it can be assumed that you, as the heir, will be left with some assets after deducting the (albeit high) debts. Possible alternatives are:

In the case of inheritance, many stress factors come together at once. For financial, legal and organisational support in the settlement of the estate’s liabilities, an experienced lawyer in inheritance law is indispensable as a contact person. They can work out the best solution for your individual situation.

Our Schlun & Elseven lawyers for inheritance law are experienced in dealing with the formalities before the probate courts, in necessary negotiations with creditors of the testator and generally in the successful rejection of an inheritance. We have the necessary expertise, alongside many years of experience, to ensure compliance with forms and deadlines and to prevent conflicts with the inheritance. We can provide you with advice on the spot at our offices in Aachen, Cologne and Düsseldorf, as well as nationwide with the help of our conference rooms in Berlin, Hamburg, Munich, Stuttgart and Frankfurt. Clear communication with our clients is particularly important to us, which is why we offer our services both in English and other languages.

Please use the contact form to tell us about your concerns concerning refusing an inheritance. After receiving your request, we will make a short preliminary assessment on the basis of the information provided and give you a cost estimation. You are then free to decide whether you want to instruct our inheritance law team.